Last Updated on December 14, 2022 by allprotrailersuperstore

Throughout the northeast United States, snow is a fact of life between November and February. Each passing year, many communities are liable to see several inches of snow pile up on their streets, sidewalks and driveways for periods of three days or more. Consequently, snow plows and salt and sand spreaders are seen on trucks throughout these communities. So how do these devices perform, and what should you know about them?

What Are Snow Plows?

Snow plows are attachment devices that are mounted onto the fronts of vehicles for the purpose of snow removal along streets and highways. In areas where snowfall is common during the winter months, snow plows are often seen along some of the busier thoroughfares. Thanks to snow plows, commuters can go about their daily commutes unimpeded, even during subzero temperatures when snow sticks to the ground in thick layers.

Snow plows come in a range of sizes and shapes. Most snow plows are designed for large public cleanup vehicles, the likes of which are typically seen on busy streets in the aftermath of snow storms. These vehicles are usually equipped with studded tires for better traction on icy terrain. The plow is placed in front of the truck and functions as a scooping device that clears away the snow that lines a given roadway.

Some snow plows are made with unique designs, such as scooping angles that can clear away snow from hard-to-reach areas. There are even snow plows made for smaller trucks. These smaller plows are designed for private users who live in remote areas that might otherwise be buried with snow for the duration of a cold spell.

In busy areas that see heavy snow, plows serve a crucial function in the continuity of these local economies. Without the heavy-duty scraping and scooping power of snow plows, many of these areas would be largely shut down in times of heavy snow.

While kids might love to play in the snow and get a day or two off from school when the busses cannot safely run, most adults find snow to be an annoying hindrance on any day besides Christmas or New Year’s Day. Thanks in large part to the function and power of snow plows, the world does not have to shut itself down for random periods of time due to Mother Nature. 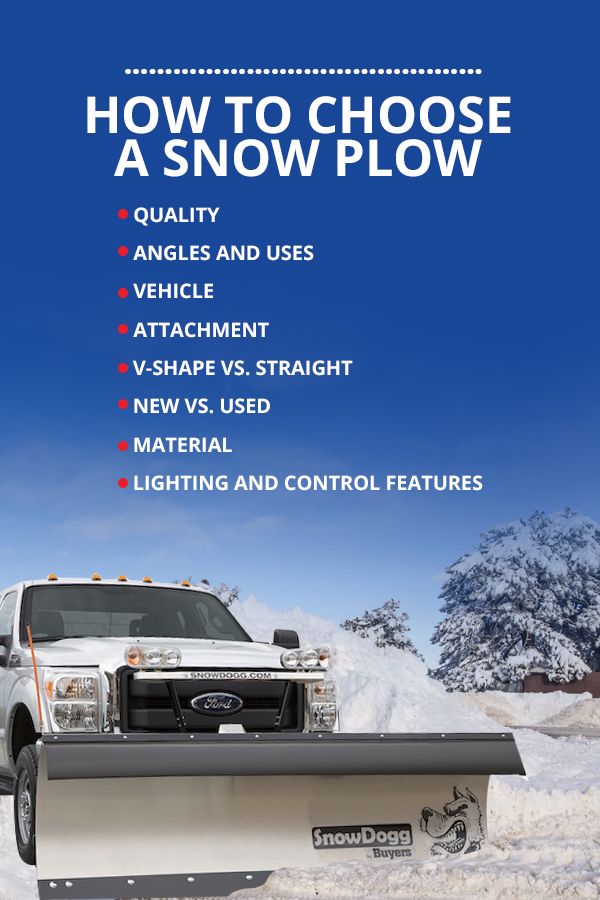 How to Choose a Snow Plow

When you see used or new snow plows for sale, keep in mind the following factors when making your choice:

When you purchase a snow plow, the investment should last for many years to come. Remember that you might only use the equipment a couple of times each year. Therefore, you would not get much value from a plow that loses is functionality after five years. As you shop around, pay attention to the specs and make savings a secondary consideration.

Make sure the snow plow you purchase is designed with simple and easy attachment mechanisms. On days when you have to use the plow, you will likely be attaching it to your vehicle in cold, stormy and sometimes dark conditions. In terms of functionality, the snow plow you choose should emphasize ease-of-use over “speed” and other catchphrases.

Overall, V-shaped snow plows are best for commercial use while straight-blade plows are handy for driveways. If you operate a snow plow for a living, the V-shaped plow will help you cut through the snow around curbs and sharp angles, even under icy conditions. V-plows can also make plowing easier on your truck because the arrowhead design is better equipped to cut through icy snow.

New snow plows are generally backed with warranties and are built to last without defects for extended periods of time. Granted, you can save money on a used model, but only if the plow is good enough to last. Otherwise, you might save $100 on a plow that breaks down after one season. If you decide to buy used, inspect the physical condition of the secondhand plow. If you see cosmetic flaws like chipped or scratched paint, it won’t necessarily matter. But if you see a dent in the metal, that would indicate that the prior owner had an accident with the plow.

The material of a snow plow helps determine its longevity and performance. Poly plows resist corrosion and have a sleeker surface, but are also heavier due to the reinforced steel backing. Stainless steel plows have super-sharp cutting abilities but can get dented by flying rocks, which can impact performance over time.

When plowing in the dark, your plow will need an optimal headlight; otherwise, you won’t be able to see the snowbound road ahead. Make sure the plow you choose is equipped with a double-clamped light to hold the fixture in place through the bumps and stresses of the job. The remote control will serve as your only interaction with the plow, so choose one with simple functions and a basic set of buttons.

What Are Salt Spreaders?

A salt spreader is a device that attaches to the back of a vehicle to spread salt on a newly plowed road. People who drive ATVs equipped with snow plows in front often have salt spreaders attached in back to treat the ground against ice formation and further snow buildup.

Salt is used to fight snow because the mineral acts as a melting agent. When you treat a road with salt, the water left in the wake of a snow plow will be less prone to freezing and setting the stage for further layers of snowfall. This is the reason why rock salt is commonly used along roads and highways during the cold weeks when snow and hail are in the forecast.

With the added spread of salt, there is less possibility of re-layered snow within the following 24 hours. Moreover, there is less chance of dangerous ice formation that might otherwise cause slides, accidents and collisions. While salt is a powerful tool for fighting snow, it’s also important to have a strong blower that can crack through snow and ice and move such buildup out of the way.

How to Choose a Salt Spreader

As you shop around for a salt spreader, consider the following factors:

Consider the amount of ground that the spreader will need to cover on a given route. If you drive a commercial plow, you should have the vehicle equipped in back with a tailgate spreader. With a tailgate spreader, the salt will be dispersed in a circular motion across the driving width of the lane.

If your salt spreading will mostly be confined to narrow areas such as walkways and driveways, your best option would be a walk-behind salt spreader. The walk-behind spreader is a manually operated, wheelbarrow-like device equipped with a handle. To operate, you pull the handle along from behind as you tread snow-covered walkways by foot.

The material of the salt spreader will impact its functionality over time. In recent years, polyethylene (“poly”) has become the favored material among plowers because of its sleekness and salt-resistant qualities. Salt dispersed from a poly spreader slides out more smoothly without sticking to the inner lining. Steel, by contrast, is coarser and liable to cause salt to adhere to its surface. A steel spreader could corrode over time and lose its ability to function at optimal levels.

It’s important for a salt spreader to release salt at a rate that won’t clog the system. In this regard, conveyor systems offer the poorest performance because the salt flow is unregulated. The best alternative with steel salt spreaders is the auger system, in which an auger is placed in the hopper to break down salt materials prior to discharge. Some poly salt spreaders are equipped with vibration systems, where the salt is broken down in the hopper by means of agitation.

Which Snow Plows & Spreaders Are Available at All Pro Trailer Superstore?

At All Pro Trailer Superstore, we sell snow plows in a range of sizes, designs and materials. The following models are at the lower-cost end of the spectrum:

If you are in the market for a snow plow within the 4k price range, the following models offer even more capacity:

In th\ge.com/snow-plows-and-sale 5k range are the following models, each with unique design features for heavy plowing:

All Pro Trailer Superstore also carries a range of salt spreaders, including the following models in the 1k range:

If you are willing to spend a bit more, the following models offer advanced salt-spreading capabilities:

All Pro Trailer Superstore sells snow plow attachment devices and truck-mounted salt spreader components that will equip you for a range of work purposes, whether you intend to plow on your own property or out on the roads throughout your community.

When a road is covered with several inches of snow in subzero temperatures, it’s simply not safe for cars or busses to brave such terrain. Unless these roads are cleared for passage, most commuters cannot get to work or even to the supermarkets to stock up on vital supplies. For a lot of people, snow amounts to a loss of income and the depletion of food and other necessities. If not for snow plows, many people would fall behind on their living expenses or be rendered housebound for undetermined periods.

With truck snow blade attachment devices, anyone who owns a half-ton to three-quarter-ton pickup truck could have a far easier winter in the colder climates. With a snow plow, you could clear away the snow in your driveway and on your local streets going into town. While others are left homebound for three days or more at a time, you would be able to continue working and earning money. Depending on the types of work you do, those added work days that would otherwise be lost could instead cover the annual costs of owning and operating a snow plow.

If snow is a fact of life each winter in your community, snow plowing could even be a source of income. In order to clear the snow-covered roads in your neighborhood, your truck would need two attachments: a snow plow at the front of your vehicle and a salt spreader for the rear. Combined, this equipment could make your truck unstoppable even as you plow through up to 14 inches of snow during the coldest weeks of January.

All Pro Trailer Superstore offers financing on products over $1500. With some of the best rates in the industry, we’ve helped customers from all over finance their snow plows and salt spreaders, as well as cargo and utility trailers. 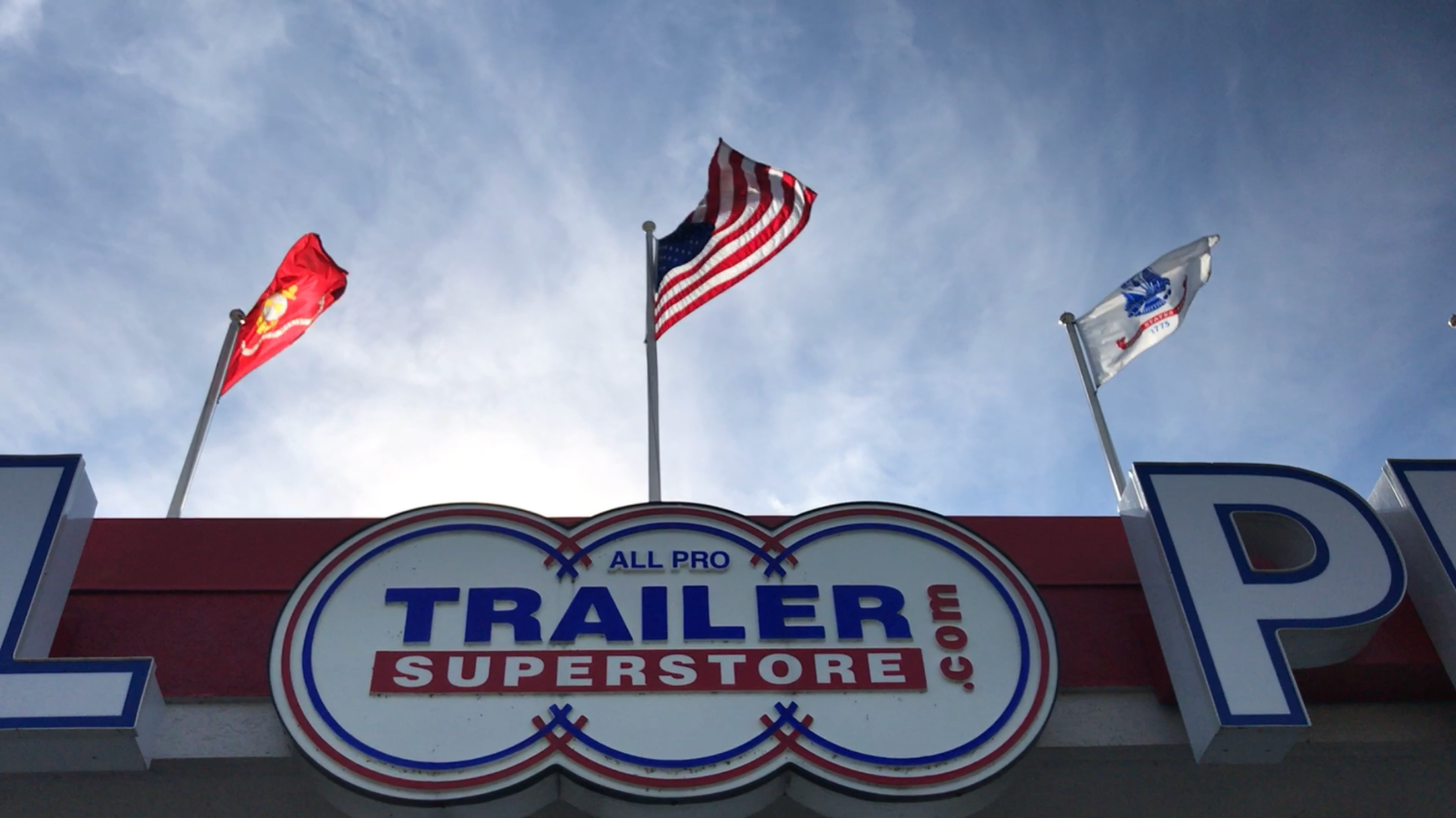